If you’re a fan of either BUBBA HO-TEP, the weird fiction tale penned by Texas icon Joe R. Lansdale, or BUBBA HO-TEP the weird grind house movie directed by cult favorite Don Coscarelli – – – then you’ll want to check out the BUBBA HO-TEP AND THE COSMIC BLOOD-SUCKERS comic. If you’re unfamiliar with both of those antecedents, then pick up the comic and give it a try-out.  If you enjoy it, then make sure to read the original story and watch the movie. You’re going to be thrilled and entertained beyond anything the comic delivers.

I’m a big fan of both the printed story and the movie, but not as sure about the comic. While it makes a noble effort to stay true to the original spirit and maintain the wackiness of the original, it falls short and disappoints.  I’ll reserve final judgment until I’ve finished the saga, but at this point I have a few objections.

My main objection is how the comic departs from the original story and in doing so, in my opinion, takes some of the specialness away.

Lansdale’s original story plays with the urban legend about Elvis sitings and reveals how The King never died.  The real Elvis Presley grew tired of his life and longed to go back to his roots, singing and performing in small clubs.  So he switches places with a skilled Elvis impersonator.  It’s the impersonator who, years later, dies while sitting on the toilet at Graceland.

The real Elvis becomes the best Elvis impersonator ever, but still never comes close to the notoriety or riches he once enjoyed. He lives in obscurity in a trailer park until, in declining health, he falls from the stage and breaks his hip.  He ends his days in a rundown nursing home.  There he meets a black man who says he’s the real John F. Kennedy.  Strange things begin to occur at the nursing home, and Elvis and JFK work together to take down the Egyptian mummy who roams the halls at night and steals souls of the residents.

Coscarelli’s film brought the craziness of the story to a vibrant visualization, playing on B-movie and horror film tropes, with some remarkable performances from Bruce Campbell as Elvis and Ossie Davis as JFK.  Their characters were just exploring their commonality and developing a friendship when the menace interrupted them. Their bumbling and inexperienced attempts to confront the terror were part of the charm of both story and film.

In BUBBA HO-TEP AND THE COSMIC BLOOD-SUCKERS the story takes place long before the nursing home events, in an earlier time before the real Elvis traded places with his imitator. Comic writer Joshua Jabcuga removes the charm when he postulates the notion that Elvis was an experienced monster hunter, having served in this capacity under the thrall of his manager, Colonel Tom Parker, for years. That means that when Elvis met Bubba Ho-Tep he was a veteran of these conflicts and neither surprised nor inept.  Way to muck up the mythology, Jabcuga.

When the development of a comic series was originally announced by IDW in 2017, Lansdale was mentioned as a co-writer. His name is strangely absent from the credits page. I wonder why.

In addition, Bubba Ho-Tep was the name referring to the ancient monster. I seriously doubt that the mummy is going to step in and play a role in this comic, but his name is right up front in the title. Of course, fans of the original might not make the same association if the book was titled REAL ELVIS VERSUS THE COSMIC BLOOD-SUCKERS.

Credit Jabcuga for introducing some weirdness of his own to this story.  However, his additions are just odd and wacky and lack the down-home charm that exudes through Lansdale’s original story.  Lansdale is a veteran story-teller whose style is easy to imitate but harder to duplicate.  Regardless of the genre he writes in, reading Lansdale is akin to sitting on the porch next to Grandpa in his rocking chair while he spins a favorite yarn of days gone by.  Fascinated and riveted at the same time.

In Jabcuga’s world, Colonel Parker runs a covert agency employed by the government to investigate otherworldly threats.  President Nixon gives him the “guess and find” mission of uncovering vampires in human guise who can only be seen through 3-D glasses. Parker gets around the Louisiana swamps on these missions via a huge steamboat crewed by zombies enslaved to him. Elvis has to go along with this because Parker holds his beloved mother’s soul in thrall. Elvis and his good ole boy bodyguard, Johnny Smack, get paired up with a blind man, a femme fatale, the descendent of John Henry, and a lumberjack-dressed logistics expert named Jack.

As crazy as the original Bubba Ho-Tep story was, you couldn’t read it without smiling.  Jabcuga does his best to match the craziness, but he can’t equal the humor as much as he tries.  The comic is weird, but it’s not very funny.

However, there were a few scenes that made me chuckle.  In the opening story, a homeless man sneaks into a Mississippi junkyard.  As he approaches the chain-link fence, the obligatory Beware Of Dog sign is displayed. Alongside it are two more signs.  One has a logo of a gun with the message “We Don’t Call 911.”  The other sign says “Can you make the fence in 6 seconds? The dog can.”

Later, Elvis is having a conversation with the femme fatale, explaining why he’s allowing Parker to dominate his time and use him this way.  She remarks that she now understands “why the hit records stopped and you made all the bad movies.” 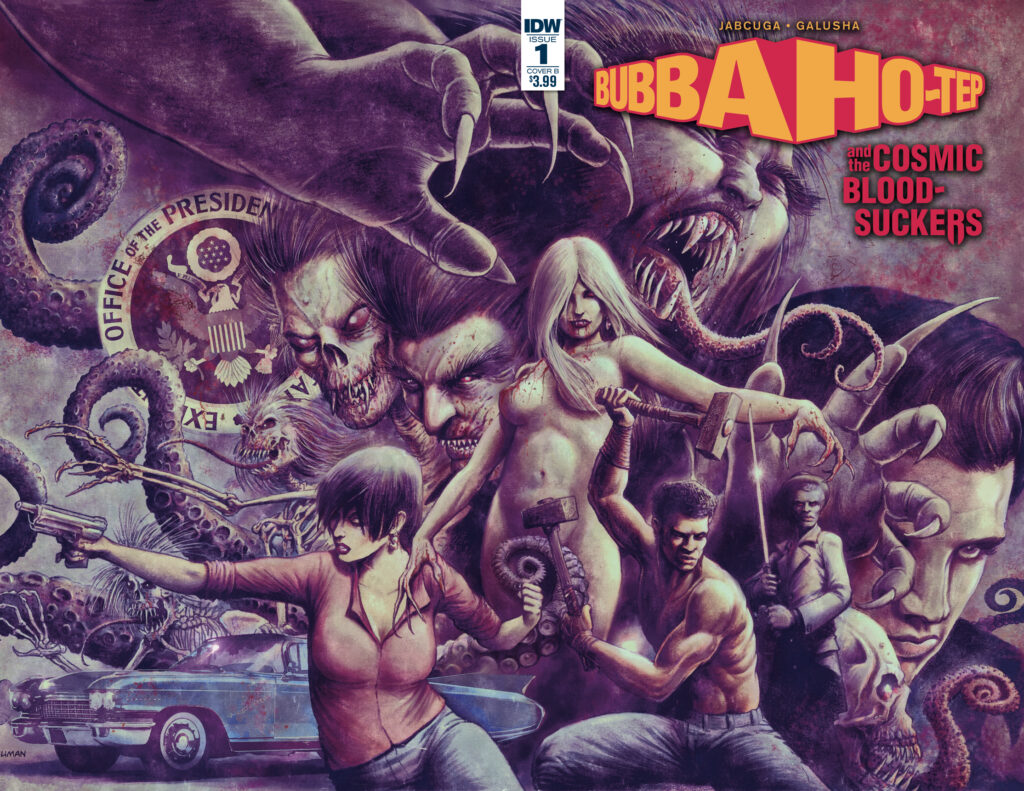 STORY: Needs to win me over. Crazy alone won’t do it. 1.5 POINTS

ART: No quibbles here. The art is great and very appropriate to the story, in a pre-Comics Code EC Tales From The Crypt way.  2.5 POINTS

COVER: Not excited by the fat Elvis. But that Tim Truman double cover is a winner.  1 POINT.

READ AGAIN? I might, after I check out the rest of the story. But otherwise it’s not necessary, and somewhat painful to Lansdale fans. 0 POINTS

RECOMMEND? To fans of Bubba Ho-Tep: if you don’t check it out, you’ll always be wondering about it.  Spend a little on the first issue and go from there.  1/2 POINT.

TOTAL RATING: 5.5 POINTS. Only for the dedicated or curious.